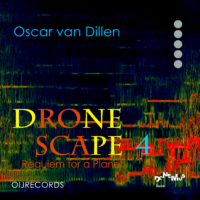 The source of the sounds one hears on this album is the very recently developed chaotic oscillator synthesizer Generate by Newfangled Audio, a very complex instrument, at times difficult to control precisely, at other times, in many simultaneous complex instances, threatening to overload the computer, and behaving unpredictably. Some of the unexpected side effects of the complex sound synthesis have been preserved in the end result. A small palette of carefully self-built just manageable sounds (patches) has been used in all three compositions. The complex sound sometimes resembles “real instruments” such as cello, trombone and (contra)bassoon, or bass clarinet, but this is an illusion, as can be heard when it moves through various registers: these are all purely synthetic sounds.

END_OF_DOCUMENT_TOKEN_TO_BE_REPLACED 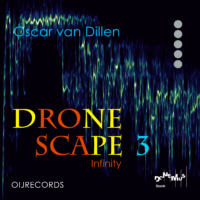 Listening to this music by van Dillen resembles entering a sound exhibition, the composition presents itself to the listener as a kind of sculpture, but not to be viewed from the outside, but to be heard and experienced from the inside. A sculpture maybe, but not in the sense of presenting itself as an object to a subjective listener to be viewed while moving around it, but as a subject moving around the listener thus turning the listener into an object, even an object of scrutiny too perhaps. One finds oneself in a large musical form, a large timespan, surrounded by slow changes of and within a many layered sounding substance. Sound objects and substance float by, partly in a predictable (slow transitions) and partly in an unpredictable (sudden events) manner. The sounds, the polychromatic, also microtonal, elements chosen, are mostly subtle and generally varied, but at the same time strictly limited to the precisely chosen palette of timbres. The silences embedded are integral part of the work and not to be seen as mere breaks between sections: in the silences, the music continues unbroken.

END_OF_DOCUMENT_TOKEN_TO_BE_REPLACED 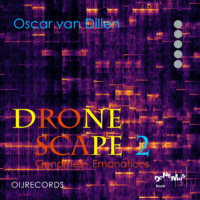 Genomes takes the idea behind Pulsations (from Dronescape 1) to a next level, distilling a far greater variety of sounds from the very same core samples which resembled heartbeats. It is solely composed of rhythmically used elements. The listener enters a hypnotic timescape, possibly evoking the inner sounds of some primeval soup containing amino acids, rhythmically bubbling, but then again a scraping breath is heard, and later some mechanical sounds, the latter probably referring to a less distant time.
Emanations is composed from a set of 9 chords recorded on a Yamaha CFX concert grand piano, with various tunings, playing techniques, and recording positions. As to the latter, some chords were recorded with microphones close (close miked) and others distant with a more room sound, with more distant microphones. The full set of chords was recorded both una corda and tre corde.

END_OF_DOCUMENT_TOKEN_TO_BE_REPLACED 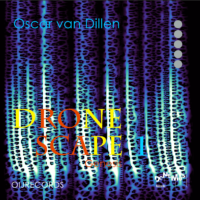 In music, a drone (or bourdon) is understood to be a continuous sound, interval or chord, usually an accompaniment to a modal structure (melodic music based on a particular scale). Special instruments exist, dedicated to playing the drone only, such as the tanpura and the swar peti from India. Instruments are found all over the world that include drones within the melodic instruments themselves, such as the taraf strings on many Asian string instruments, but also the drone pipes next to the chanter in bagpipes, or the hurdy gurdy, and its predecessor the organistrum with their drone strings. Aboriginal didgeridoo music can be considered to consist purely of a rhythmized drone. Traditionally, drones with their sustained pitches are used as a harmonic support to the melodic music performed. In the Dronescapes by van Dillen the music itself has become rhythmized drone and soundscape at the same time, foregoing the traditional compositional hierarchies of theme and accompaniment, by using the following musical elements, in order of prominence: 1. sound 2. harmony 3. rhythm 4. melody.

END_OF_DOCUMENT_TOKEN_TO_BE_REPLACED

In our 21st century it is becoming apparent that the bigger the cities, the more insurmountable their problems seem, and the less of these are actually resolved, often not even short-term any longer. Recent research shows that although cities have serious problems, they also offer the greatest opportunities, and surprisingly, the actual percentage of serious problems is often smaller the bigger the cities are: there are in general significant differences in our perception of the cities’ problems as compared to the actual problems. The city can therefore be regarded in both its aspects, on the one hand being both rich in opportunities, in mosaics of subcultures, containing a large variety of people, and on the other hand being rich in risks and dangers at the same time. All these considerations, as well as the City’s Janus Bifrons (or Dr. Jekyll – Mr. Hyde) aspects have been used in the music of de Stad.

END_OF_DOCUMENT_TOKEN_TO_BE_REPLACED

OIJ Records was founded July 2020. It is a record label dedicated to publishing recordings of the compositions by Oscar van Dillen. Since its inception OIJ Records became a sublabel to Donemus records Composers’ Voice series. Thanks to this collaboration, all albums are distributed to: 7Digital Akazoo Amazon Anghami Apple … END_OF_DOCUMENT_TOKEN_TO_BE_REPLACED